This browser is not actively supported anymore. For the best passle experience, we strongly recommend you upgrade your browser.
All Posts Subscribe
May 28, 2021 | 3 minutes read

Scottish Court of Session Grants Injunction, Finding Communication to the Public on Reddit

In a landmark decision, the Court of Session in Scotland have for the first time granted an interim interdict (akin to an interim injunction in England) against an individual alleged to have infringed Sky UK Limited’s (“Sky”) copyright by providing hyperlinks on Reddit to copies of Sky’s broadcasts, and uploading copies of such broadcasts to YouTube.

Sky alleged that the individual had infringed Sky’s copyright in its broadcast copyright works by sharing hyperlinks to copies of Sky’s copyright works and uploading to YouTube copies of entire episodes of content broadcast on Sky’s paywalled channel service, and Sky Arts (which had recently become free to air). Evidence obtained by Sky supported Sky’s allegation that the individual was the sole moderator of several subreddits (ie communities on the social news platform Reddit), and was providing hyperlinks which allowed readers to gain unauthorised access to view and share the copyright material on YouTube and Reddit. It was evidenced that the individual had amassed a growing number of subscribers to his social media platforms, running to tens of thousands, and had solicited and received payments to accounts he held with PayPal and Patreon platforms amounting to several thousand pounds.

Sky had made numerous previous requests to YouTube and Reddit to remove the unauthorised content, although this had only limited success, as new copyright material continued to be distributed by the individual.

It was submitted that the individual’s activities amounted to copyright infringement under sections 16, 17 and 20 of the 1988 Act. In particular, it was asserted that he had copied broadcasts made by Sky and communicated them to members of the public. In addition, the three subreddits which the individual operated were held to have been operated with the purpose of posting links to Sky’s broadcasts and that the individual’s posting of the links constituted a “communication to the public by electronic transmission” for the purpose of section 20 of the 1988 Act.

The Judge, Lady Wolffe, was satisfied that Sky had sufficiently identified the individual as the person behind the YouTube and Reddit channels, based on the investigations and evidence obtained by Sky.

In determining Sky’s prima facie case, the Judge concluded “I have no hesitation in finding that the pursuer has presented a strong prima facie for breach of copyright in respect of the Broadcasts by the defender. On the material presented, the defender was not just engaged in copying images, which suffices for section 17(4) of the 1988 Act, the defender appears to have copied and made available to the public whole episodes of the pursuer’s content which has the protection of copyright.”

In respect of those broadcasts which were not behind Sky’s paywall, the Judge concluded that the links to the free to air Sky Arts programme also constituted communication to “a new public” on the basis that whilst these programmes were available to the public without payment, an individual was nonetheless required to create an account with Sky and to download an app in order to view the content in the broadcast. In doing so, the Judge held that “an individual creating an account would have had to assent to the pursuer’s terms and conditions. These terms included restrictions on the account user and they expressly prohibited any copying, downloading or transmission that was not for personal use. The pursuer was making this content free only to that proportion of the public who would create accounts with it and who would agree to the pursuer’s terms and conditions.”

For these reasons, the Judge granted interdict ad interim in the terms sought by Sky.

While there have been numerous cases requiring analysis of the Communication to the Public right in the context of providing hyperlinks at CJEU level and in the English courts, this is the first such case before Scotland’s Court of Session.  The case is helpful to copyright holders in confirming that the situations in which a “new public” (and thus a new and actionable communication to the public) will be found may include where the work has been made available with the copyright owner’s consent via a platform that requires a user sign-in, even where there is no paywall.  The case also illustrates the Scottish courts’ readiness to grant interim interdicts (injunctions) in such intellectual property claims. 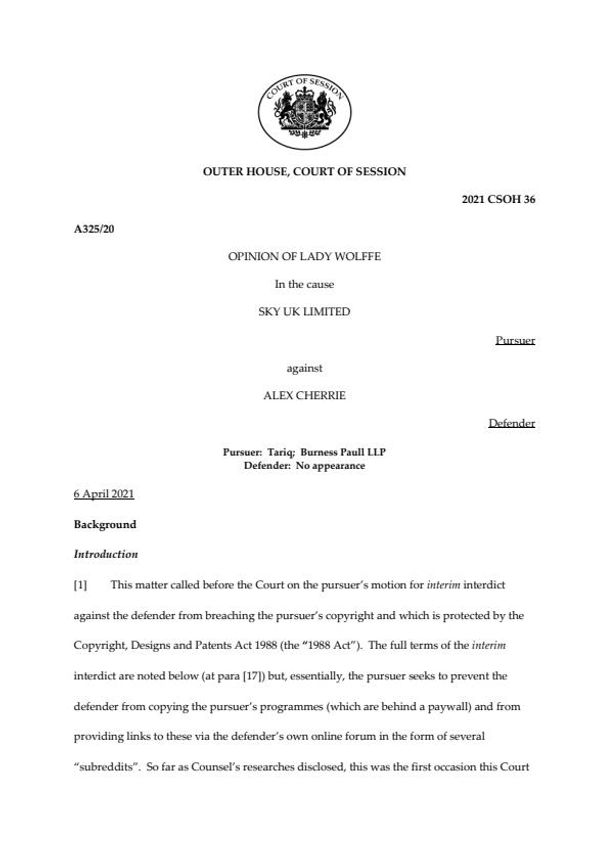